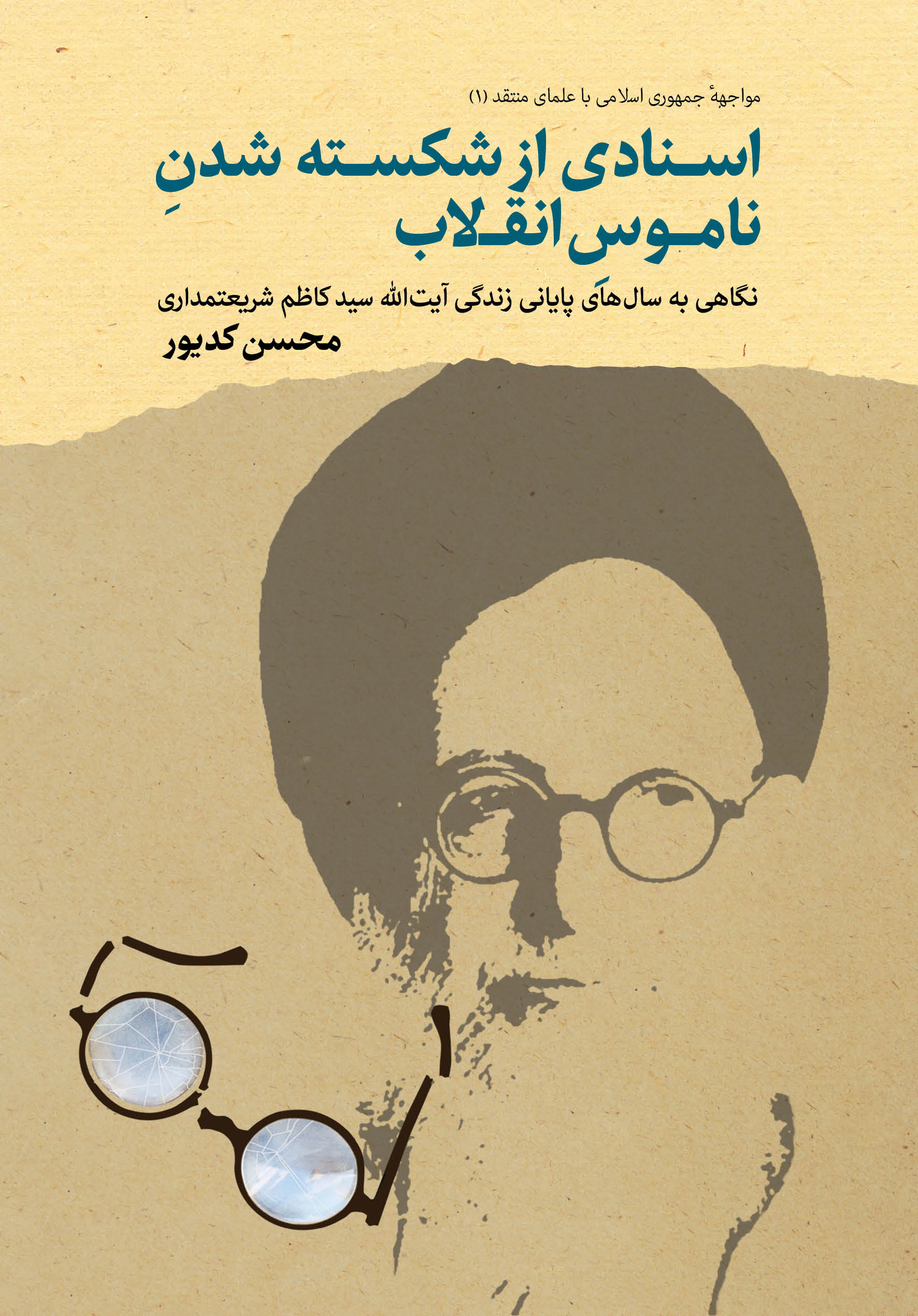 The Dissident Ayatollahs and the Islamic Republic of Iran Series (1)

My father subscribed to the monthly Darshayi as Maktab-e Eslam (Lessons from the School of Islam) from the beginning of its publication and I spent my youth flipping through the quarterly Nijate Nasl-e Javan (Rescuing the New Generation). From early on, I was attracted to Dr. Ali Shari’ati and Ayatollah Khomeini’s revolutionary ideas, like my peers, and was suspicious of Ayatollah Shari’atmadari and Mehdi Bazargan’s views. Even though I was studying in the Qom seminary from Khordad 1360/ June 1981, I never knew what happened to Shari’atmadari or how he died.

Years passed and as I studied, understood more, and gained experience, I further distanced myself from the revolutionary and extremist tendencies of the Islamic Republic. This change began in the summer of 1366/1987. In the winter of 1367/1989, I had completely distanced myself from my previous views and on 8, Farvardin 1368/28 March 1989 I took Ayatollah Khomeini’s picture off the wall of my library with teary eyes. The photograph’s time had passed.

Around 1372/1993, when I was writing my book Nazariyehaye dawlat dar Fiqh-e Shi’a (The Theories of the Governance in Shi’i Fiqh), I was briefly introduced to Shari’atmadari’s very different political views for the first time. Sentiments against him were so strong that I had, perforce, to credit the third version of the “Theory of an Elected Islamic Government” to his student, Muhammad Javad Maghniya, so that I could publish the book; meanwhile Maghniya referred the exact idea to Ayatollah Shari’atmadari in the same source!

In early 1380/2001, in the series of articles titled Hokumate Entesabi (Appointive Government), I mentioned something from Shari’atmadari’s judicial book for the first time. My mentor, Ayatollah Montazeri, had introduced and loaned me this book. When I began to write “Saire Tavvolate Andishiye Siyasie Ayataollah Montazeri”

(The Evolution of Ayatollah Montazeri’s Political Thought) in 1390/2011, I felt that it was time to research the evolution of Shari’atmadari’s political thought. I left the first research incomplete and began to read and collect sources about the life and opinions of Ayatollah Shari’atmadari. I had finished taking notes on and collecting the sources when something happened in Aban 1391/November 2012, as explained below, that drew me to write the first of the following four articles.

The previous day’s news (12 Aban 1391/2 November 2012) explained, “The notice from the Committee for Executing the Imam’s Orders to confiscate the house of Ayatollah Shari’atmadari has been executed”. The son of the deceased Marja’ (source of religious imitation), Hassan Shari’atmadari said: “According to this warrant, my sister must evacuate our home in 15 days and give the house to the Committee for Executing the Imam’s Orders”. In objection to this warrant, he further stated, “I wrote the Grand Ayatollahs, explaining the situation. My sister in Iran has also wrote the Supreme Leader of the Islamic Republic in objection, but nothing has been done”.

This summer, I finished extensive research on the political thoughts of Ayatollah Seyyed Kazim Shari’atmadari (1284-1365/1905-1986), but have not yet been able to edit and publish this project. In the midst of this research, which is a re-reading of the Revolution and the Islamic Republic’s ideas, I have discovered different sources that would illuminate some uncertainties about the last 50 years of Iranian history. When reading the aforementioned events along with news of the illnesses and hunger strikes of political prisoners – stories we have heard of quite a lot in the previous months – my attention was again drawn to this research. I thought that before publishing the book, I should publish sources from my research that are relevant to the aforementioned news with a short explanation.

Perhaps today’s rulers could learn from previous ones and stop repeating the history of the past three decades.

The two events that I refer to are the confiscation of Ayatollah Shari’atmadari’s property during his lifetime and the leaders’ reluctance in providing him healthcare and in transporting him to the hospital in time. The first event is relevant to the recent confiscation of his home and the second can be related to the Judiciary Power’s negligence in the rights of sick political prisoners and the brave men and women who have gone on hunger strikes in objection to the violation of their basic human rights. I hope that the Chief of the Judiciary Power and, most importantly, the Supreme Leader will read this evidence side by side and give credence to the possibility that the evidence of their actions regarding the right of political dissidents will one day be evaluated in this manner as well. The evidence is so telling that I see no need in explaining or clarifying them.

These oppressions are what shake the foundation of government and jeopardize the legitimacy of the Islamic State. If the Islamic State (theocracy) has treated the Leadership’s opposition – a Marja’ nonetheless – so unjustly, how has it or how will it treat other critics and opponents? That Ayatollah Shari’atmadari even had the intention of organizing a coup d’etat against Ayatollah Khomeini does not religiously, morally, or legally justify how he was punished, especially the limitations put on his healthcare. Were the Sirah (Tradition) of the Messenger of God and Imam Ali to their critics truly this way as well?!” [1]

(12 Aban 1391/2 November 2012) was reviewed by many supporters and members of the office of Ayatollah Khomeini. The second article, Asnadi az Shekaste Shodane Namouse Enqelab (Evidence of Dishonoring the Revolution) (30 Aban 1391/20 November 2012) was written in response to the most important of these reviews and was, fortunately, reviewed as well. Similarly, the third and fourth articles, Momane’at az E’zame Bimare Salmande Mobtala be Saratan be Bimarestan (Refusing to Transport an Elderly Cancer Patient to the Hospital) (16 Azar 1391/6 December 2012) and E’adeye Haythiyyat az Ayatollah Shari’atmadari (Restoring Ayatollah Shari’atmadari’s Reputation) (13 Dey 1391/ 2 January 2013) were written and published in response to these reviews or criticisms. These articles were published on the author’s website and Jaras (the Green Movement’s website). Each important criticism was responded to in the next article. The criticisms have been published again in the “Information and News Center of Jamaran” (The office of Late Ayatollah Khomeini), with the most important being published on the Jaras website and the author’s website.

9 reviews of the first article, 7 of the second, 9 of the third, and 5 of the fourth article, and in sum 30 reviews or criticisms have been published.[2] The publisher of two thirds of these was the “Information and News Center of Jamaran”, which is the official source of information dissemination at Ayatollah Khomeini’s office. All 30 reviews have been published here chronologically. They are not on the same level; some are more insulting attacks than reviews (obviously the material published in different governmental sites), but most are polite. Although none of the reviewers, especially the ones from Jamaran, mention even a word from my articles and prefer to offer a one-sided judgment, my four articles and their thirty reviews are now being published next to each other in one volume, without unnecessary additions, so that the reader can be the judge. Most of the criticisms are in an interview format and diverge from the topic at hand. However, these irrelevant parts have not been omitted so that the essence of the reviewers’ arguments can be saved and offered to the reader.

I hope that the office of arranging and publishing the works of Ayatollah Khomeini will read the book once and themselves conclude in isolation.

I have felt the necessity of gathering these articles and criticisms for a while, until one of my students volunteered to complete this task. He published the volume under my supervision after correcting typed errors, formatting, and creating a table of contents and an appendix of images. I am truly grateful for his efforts. Unfortunately, I am unable to mention his name for his own security.

I hope for the possibility that this book be published in print and distributed freely in my country. Has the era of “sanctioned writers” truly come to an end?! This very book is a good test case for the claims of our respectful statesmen.

The era of infatuation and hatred is over. I am eager to understand the truth. A question has been clawing at my mind: How have the leaders of the Islamic Republic treated their peaceful critics and opponents?

I have commenced the answer to this question with the case of Ayatollah Shari’atmadari. The summary of my answer is this: Ayatollah Seyyed Kazim Shari’atmadari (1284-1365/1905-1986) was one of the most prestigious Shi’i Marja’s. After issuing his critical statements against the mandates of the Supreme Leader at the dawn of the referendum about the constitution of the Islamic Republic in Azar 1358/December 1979, he was banished from the country’s public forum. He was put under house arrest for the rest of his life based on accusations of his knowledge of Sadegh Ghotbzadeh’s coup d’etat of 27 Farvardin 1361/16 April 1982 and his reputation continued to be attacked by media, Friday Prayer tribunes, and the Islamic Parliament, without granting him the right to defend himself.

For the first time in Shi’i history, two religious associations consisting of Ayatollah Khomeini’s students – Jame’eye Moddaresin Hawzeye ‘Elmiyeye Qom (the Association of the Teachers at the Qom Seminary) and Jame’eye Rawhaniyyate Mobareze Tehran (the Association of the Combatant Clergy of Tehran) – along with the appointed Imams of the Jum’a prayer stripped the Supreme Leader’s opponent of his religious authority. Shari’atmadari was the target of the worst accusations and insults. Even his death, which was a result of his delayed transportation to the hospital, did not put an end to the accusations.

None of the Marja’s of the 1360s/1980s recognized his removal and approved his continued imitation, even though they were not heard or allowed public publication due to the chaos and heavy censorship of the time. As a supporter of the 1357/1978-9 Revolution and educated at Qom Seminary, I have concluded, based on my research and analysis in all of the present evidentiary documents, that the rulers of the Islamic Republic unjustly ruined the reputation of the Supreme Leader’s opponent, stripped him of his authority, refused to transport him to the hospital for three years, two months, and seven days (although he was under healthcare at home), and even disgraced him after his death during his burial and funeral.

This book is the first volume of a series titled, Movajeheye Jomhouri Eslami ba ‘Ulamaye Muntaqid (“The Dissident Ayatollahs and the Islamic Republic of Iran”). This series will analyze the opinions of critical Marja’s, senior clergy, and Ulama on the one hand and the ways in which the Islamic Republic has responded to religio-political critics and peaceful opponents on the other hand. This collection will show that most of the criticism and disapproval of the Islamic Republic came from the Marja’s and senior clergy, even though they were heavily suppressed. Information about these criticisms have also been omitted, censored and destroyed, or distorted and falsified.

I hope that the publication of this series is a step toward correcting both the recent history of Iran and Shi’ism and the ways in which officials respond to political critics and peaceful opponents. Without learning from the past, we cannot hope to improve our present and future. I welcome any suggestions and criticisms in advance.

[1]. This section is borrowed from the first article.

First Article: Evidence of the Oppression of Ayatollah Shari’atmadari

Third Article: Refusing to Transport an Elderly Cancer Patient to the Hospital

Other works by this author