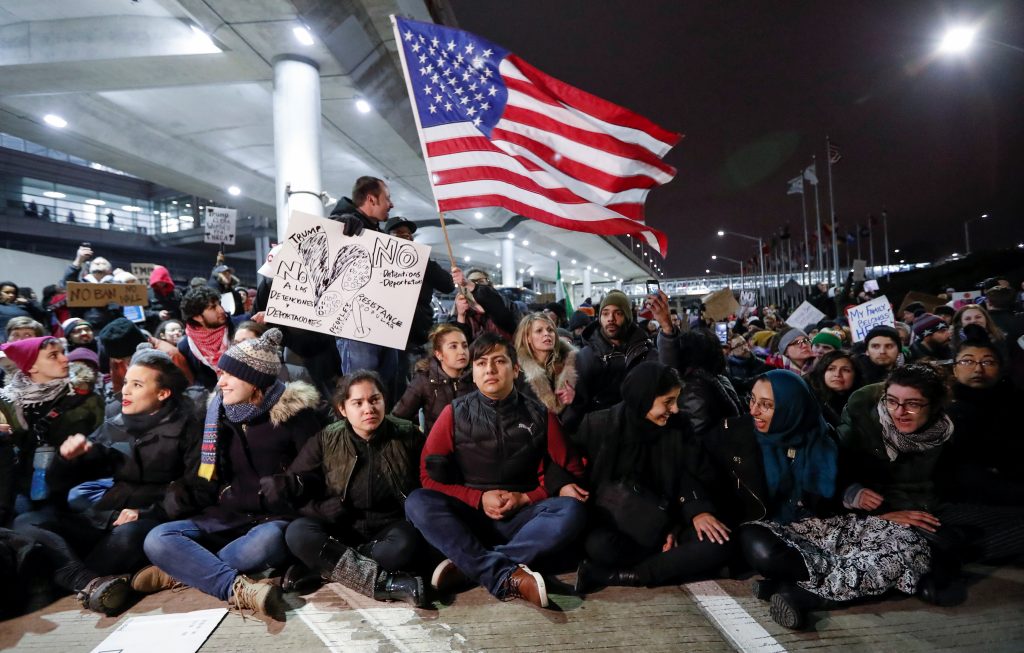 An executive order issued by Donald Trump on Friday to halt entry to the U.S. for people from seven predominantly Muslim countries has left colleges and universities racing to figure out how their students and employees will be affected.
On Saturday, an official told the Associated Press that the policy would also apply to green card holders who come from those countries. But in an apparent reversal on Sunday morning, White House chief of staff Reince Priebus said on NBC’s “Meet the Press” that the policy “doesn’t affect them.”The order froze entry to the U.S. for people from Iran, Iraq, Libya, Somalia, Sudan, Syria and Yemen for 90 days. Approximately 17,000 U.S. students come from those countries, according to Inside Higher Ed.

Priebus said that green card holders from the seven countries would be “subjected, temporarily, with more questioning, until a better system is put in place.”

Federal Judge Ann Donnelly granted a stay on Trump’s order Saturday night in Brooklyn, barring federal officials from deporting people who had landed in the U.S. and were detained at airports. The American Civil Liberties Union, who brought the lawsuit, estimated that there were 100 to 200 people in this situation on Saturday night.

On Saturday and Sunday, some colleges emailed their international students to advise against traveling outside the country until the ban was lifted. Others rushed to contact their students and faculty who were outside the country when the ban took effect. “We are testing American values in practice.” — Mohsen Kadivar, scholar and Duke University professor

Mohsen Kadivar, an Iranian dissident and scholar who has lived in exile in the U.S. since 2008, is a professor in Duke University’s Department of Religious Studies specializing in Islamic philosophy and theology. He’s currently in Berlin on a prestigious research fellowship at the Institute for Advanced Study in Berlin — but it ends in July.

“Can I return to the U.S. or not?” he said on Saturday afternoon in an interview with the NewsHour Weekend. “This is a problem, a major problem for me.”

Kadivar noted that his writing has criticized the Iranian government and said he could be at risk for imprisonment if he returned there. “It’s impossible for me to return to Iran because of my writings and my speeches and my interviews,” he said.

On Sunday morning, he said Priebus’ comments made him optimistic that he would eventually be able to return to the U.S. because he has a green card. “We are testing American values in practice,” he said in an email to the NewsHour Weekend.

Duke University president Richard Brodhead and provost Sally Kornbluth emailed staff and students on Sunday morning, calling the restrictions “confusing and disturbing” and advising against international travel for members of the community from the seven countries.

“We are in constant contact with immigration experts, other universities and national associations to understand the implications of the new policies, parts of which have already been successfully challenged in Federal court,” they wrote.

Nooshin Sadegh Samimi, who was born in Iran and has a student visa, is pursuing a PhD in the University of Pennsylvania’s Anthropology Department, a position that was the culmination of “years and years of planning, and making friendships, and making connections and networking,” she told the NewsHour Weekend.

Samimi was in the U.S. at the time the immigration order took effect. Like many others with student visas, the announcement left her with questions about whether she would be barred from returning to the U.S. if she visited her family in Iran, most of whom she has not seen for two years.

“I’ve been working to get here for years. How can I risk it … to see my family?” she said.

On Sunday morning, she said Priebus’ comments did not give her much hope, asking, “What is the next move? What are we going to do now?”

Other students spoke out on Twitter over the weekend, worried about whether they would be able to return to the U.S., including a student at Yale University and another at the Massachusetts Institute of Technology.

Niki Mossafer Rahmati, an undergraduate student at the MIT and a citizen of Iran, wrote on Facebook on Saturday that she had been turned away from an airport in Doha. “When I got to Doha, I was stopped at the gate for my US flight,” she wrote, adding that she had returned to Tehran.

Hazhir Rahmandad, a professor at MIT, told the Boston Globe that others at the school were affected as well. “We have PhD students who are in trouble. We have a lot of graduate applicants that we might not be able to get. We have colleagues who are stranded. Some people we might be recruiting for our faculty positions might consider the US to be untenable,” Rahmandad said.

The announcement spurred widespread protests at airports across the U.S. on Saturday as attorneys and activist groups struggled to determine how many people were being detained as they landed in the country. At Chicago O’Hare, John F. Kennedy International Airport, Dallas-Forth Worth, San Francisco International Airport and elsewhere, crowds gathered to protest the policy.